Former RMC volunteer and now British Red Cross employee Dalia, came to the UK from Sudan in December 2016 in search of safety and claimed asylum. As part of our Volunteers Week celebrations, she has shared her thoughts with RMC about how her experiences at the charity assisted her to settle and secure employment. 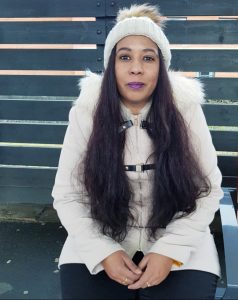 Prior to arriving in the UK, Dalia had worked and volunteered in the humanitarian and charity sector mainly supporting internally displaced people. With a desire to give back to the community that had welcomed her while waiting for a decision on her asylum claim, it wasn’t long before she heard about RMC.

“In Sudan I did a lot of work and volunteering with the International Committee of the Red Cross, Terre des Hommes and Red Cross and Red Crescent Societies. When I arrived in the UK, I wanted to do something similar here. RMC was my first choice and I wanted to start immediately.

“I enjoyed helping and supporting vulnerable people, as they were coming from different backgrounds and cultures. Learning is two sides; I was learning from them and they were learning from me.”

From January 2017, Dalia spent her time at RMC as a health casework volunteer. Three days a week, she mainly focused on assisting vulnerable asylum seekers, refugees and other migrants supported by the centre. However, she also volunteered as a mentor on RMC’s project for unaccompanied asylum seeking children and on the Syrian resettlement project, which supports those seeking sanctuary from the civil war.

Craig Hands, Volunteers Manager at RMC said: “Dalia was a huge asset to our organisation. Through her previous work, own experiences and fact that she could speak both Arabic and excellent English, she was in a fantastic position to support our clients settle, rebuild their lives and begin contributing to the region.

“Dedicated, passionate and kind, she would always go the extra mile to support people and was an absolute pleasure for all of us to work with.”

Alongside the benefits to RMC, Dalia also said that the experience had a positive impact on her.

“I gained new skills and experience, while also being given the opportunity to gain certificates and qualifications through different training sessions at RMC. I also enjoyed it, because volunteering at RMC helped me to be part of a community and make new friends.”

Dalia is now working two paid jobs at the British Red Cross in Birmingham. The first role is a Project Assistant for the ‘Surviving to Thriving Project’ which supports young asylum seekers in the city. The second one is a Casework Coordinator for Refugee Support to help and support vulnerable asylum seekers, refugees and migrants.

“I feel I benefited from volunteering at RMC which then helped me to gain a career in the same field. I’d also like to say a huge thank you to all those that I learnt so much from. From my health volunteering, Dr Heather Thomas and Bethan Mobey, to my resettlement volunteering with Sandra Tittel and Baraa Ismail.”

And what would she say to anyone considering volunteering at RMC?

“Volunteering at RMC will help you gain confidence by giving you the chance to try something new and build a real sense of achievements.”

Volunteers’ Week (1st – 7th June) is a nationwide opportunity to say thank you for the fantastic contribution volunteers make. Throughout this week, the Refugee and Migrant Centre (Black Country and Birmingham) (RMC), will be bringing our supporters a story each day, highlighting the diverse and invaluable contributions these people make. To find out more about how we’re celebrating, follow our Twitter or Facebook.