“I always dreamed of becoming a support worker but thought I would always be working in a factory. When I came to RMC, my options opened.”

Former RMC reception and admin team volunteer Suky Sidhu, who now works as a support worker at a women’s refuge in Wolverhampton. 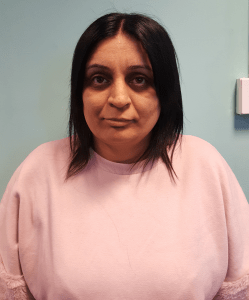 Suky first volunteered at RMC in February 2018. Living in a refuge and looking to rebuild her life, she was advised to contact the charity to secure work experience.

“I was nervous and low on confidence. It can be quite daunting and frightening when you go to a refuge. Fortunately everyone at RMC was lovely.”

Suky worked in a range of positions during her 12 months volunteering at RMC and alongside reception duties, also supported new volunteers, whilst also interpreting for and welcoming some of the charity’s newly arrived clients.

Craig Hands, Volunteers Manager at RMC said: “Suky is a fantastic example of someone wanting to grow, develop and give back to the community. Working an evening job around her volunteering at RMC, she was a pleasure for us to work with and a fantastic asset to the team.”

Suky added: “RMC brought out my confidence. Getting to speak with and deal with the public on a daily basis was a great thing to get experience of and really helped me”

Alongside the duties outlined above, Suky was also given the opportunity to complete a mentoring certificate while volunteering at RMC, which enabled her to begin running a range of programmes at the women’s refuge that was supporting her. It’s the refuge where Suky now works.

Craig said: “She worked incredibly hard, developed and achieved her big goal. She went back to the refuge as a paid worker.”

Proudly reflecting on the last year with a smile on her face, Suky said:

“I’m capable of a lot more than I thought I was. If you don’t challenge yourself, you will never know what is possible and I’m glad I can now use my experiences and knowledge to support women at the refuge.”

Volunteers’ Week (1st – 7th June) is a nationwide opportunity to say thank you for the fantastic contribution volunteers make. Throughout this week, the Refugee and Migrant Centre (Black Country and Birmingham) (RMC), will be bringing our supporters a story each day, highlighting the diverse and invaluable contributions these people make. To find out more about how we’re celebrating, follow our Twitter or Facebook.