RMC caseworker and avid Arsenal FC fan Ernest shares his experience of seeking safety and joy at finally being allowed to work. 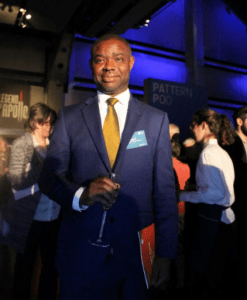 “Even as a child, it has always been in my nature to help people. I’d be up and out early, helping the elderly in my community with whatever support they needed and doing jobs. However, when I first arrived in the UK I wasn’t allowed to work and it was difficult.

“When I came to RMC the way they dealt with me was excellent. It was a turning point and I wanted to give back. I found out about and then soon started volunteering afterwards.”

Words from Ernest who is now in full time employment at The Refugee and Migrant Centre (Black Country and Birmingham) as a caseworker on the immigration team.

Ernest arrived in the UK in 2007 seeking safety and claimed asylum. After over a decade waiting for a decision, in April 2019 he was finally given the documents which granted him leave to remain, and most importantly allowed him to work.

“This was such a happy moment for me. I was hugely delighted and to be able to finally work was a great feeling.”

Despite the difficulties and frustrations during this period, Ernest began volunteering with RMC shortly after visiting the charity for advice about his claim for asylum. He helped with the launch of the charity’s Birmingham office when it opened in 2016 and in 2017, he donated an incredible 830 hours of his time to RMC, helping make a difference to countless numbers of people.

Craig Hands, Volunteers Manager at RMC said: “Ernest has been an incredible asset to our charity since he first started volunteering, and now – which we are all delighted about – as a full time staff member and paid caseworker.

“Happy to take any task no matter how big or small, he was always very professional, smartly dressed and most importantly, with a big beaming smile which we all know him for!”

Throughout his voluntary experience, the avid Arsenal football club fan took on a whole range of tasks, from advising clients to supporting new volunteers.

“I had simple goals of giving back and getting experience to help with my dreams of becoming a social worker or caseworker. I’ll always be happy as long as I’m supporting people.”

“Whether its sweeping up, cleaning desks, working on reception or giving advice, I’m happy to do it all for RMC, and it was a really conducive atmosphere to help with my goals. It gave me confidence and I would say if you come here, your life will never be the same again.”

Two months into his role as a caseworker on the immigration team in Birmingham, Ernest regularly helps clients at the Birmingham office. Challenging but also enjoyable, he said:

“I love working with people and so it has been great with my role at RMC to make a real difference to people’s lives. It is very rewarding.”

Alongside the day job, he has also been busy supporting the charity’s Refugee Week activities in the city.

“For me, Refugee Week is a chance to reflect on my personal journey, but also to celebrate and raise awareness about the contributions people from refugee backgrounds make to this country.”

To find out more about Refugee Week, visit https://refugeeweek.org.uk/ and follow @RMCentre on Twitter to catch up with how we are celebrating throughout this week.