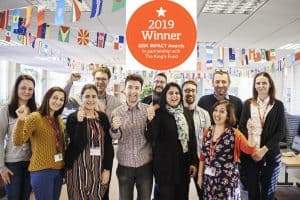 The GSK IMPACT Awards are a national programme that recognise and reward small and medium sized charities that are doing excellent work to improve people’s health and wellbeing in communities across the UK. Winners will receive £30,000 in unrestricted funding as well as expert support and leadership development provided by The King’s Fund.

The Refugee and Migrant Centre works with refugees, asylum seekers and migrants to provide legal advice, help with health, welfare, housing, education and employment services in over 40 languages. This marginalised community, particularly undocumented migrants, women and children, have higher rates of anxiety and depression caused by trauma and living in limbo. Alongside practical help, advice and casework, the charity works regionally and nationally to break down barriers and tackle marginalisation and get fair treatment for refugees and migrants. It has recently played an integral role in highlighting the Windrush scandal and supporting people affected.

Migrants, refugees and asylum seekers are more likely to have physical and mental health problems, but face barriers which can make it extremely difficult to access healthcare. To change this, the Refugee and Migrant Centre posts staff in the local A&E who can give support and guidance to help people register with GPs and reduce hospital use. Last year, it helped over 300 people per day with issues like housing, destitution and employment which are closely linked to health and wellbeing and it has worked with the NHS, police and Wolverhampton Domestic Violence Forum to train 180 men and women to help prevent violence against women and girls.

The Refugee and Migrant Centre also works with the NHS across the West Midlands to encourage their clients to get tested and treated for health conditions and runs weekly clinics to help people who can’t access urgent support elsewhere.

Arten Llazari, CEO of the Refugee and Migrant Centre, said:

“This award is really important to us. Not only will it enable RMC to continue its vital health work, but it also raises awareness of the desperate issues marginalised clients face on a daily basis. It is a real ‘pat on the back’ for RMC’s caseworkers and many volunteers who work so hard to address those issues every day.”

“The Refugee and Migrant Centre’s comprehensive service is providing much-needed help to some of the West Midland’s most marginalised communities. Their legal and advocacy work has achieved national acclaim, but the GSK IMPACT Awards judges were particularly impressed by the effect the charity is having on its clients’ health.

“Refugees and migrants are at higher risk of mental and physical health problems than the wider population, and can find it much more difficult to access the health care that most of us take for granted. By providing healthcare, working with the NHS and helping to resolve legal and immigration problems that act as barriers to getting care, the Refugee and Migrant Centre is tackling a serious and often overlooked problem.”

Developing leaders in the charity sector is a key aim of the GSK IMPACT Awards programme. All winners will be invited to take part in a tailored leadership development programme provided by The King’s Fund. They will also be invited to join the GSK IMPACT Awards Network, a national network of over 80 previous award winners working together to develop leaders, find new ways of working, and provide mutual support.

The Refugee and Migrant Centre will receive their award at a ceremony held at the Science Museum in London in May, along with nine other 2019 GSK IMPACT Award winners.